Thank you for your interest in NeuroAiD*.

This section is dedicated to medical professional. Here you can review NeuroAiD’s clinical data, read about its pharmacology, go through publications, and assess the relevance of NeuroAiD in your practice and for your stroke and traumatic brain injured patients.

For more information, do not hesitate to contact us by email at [email protected]

*Note: NeuroAiD™ (MLC601) is the original formula composed by 14 ingredients. NeuroAiD™ II and NurAiD™ II (MLC901) are simplified formulas of NeuroAiD™ (MLC601) composed with the 9 herbal ingredients of the original formula. MLC901 and MLC601 have been shown to be pharmacologically equivalent. In the interest of simplification, the following information will use NeuroAiD as a global name to designate the products except in case of specific mentions.

Following national regulations in each country, NeuroAiD is registered under various schemes, which includes dietary supplement, traditional medicine and herbal medicine. To date, NeuroAiD is available in over 32 countries worldwide and is continuously expanding its development.

With the support and involvement of international key opinion leaders in Neurology and experienced researchers, NeuroAiD has gathered over 45 publications from pre-clinical studies to randomized clinical trials, and aims at addressing a worldwide medical need. 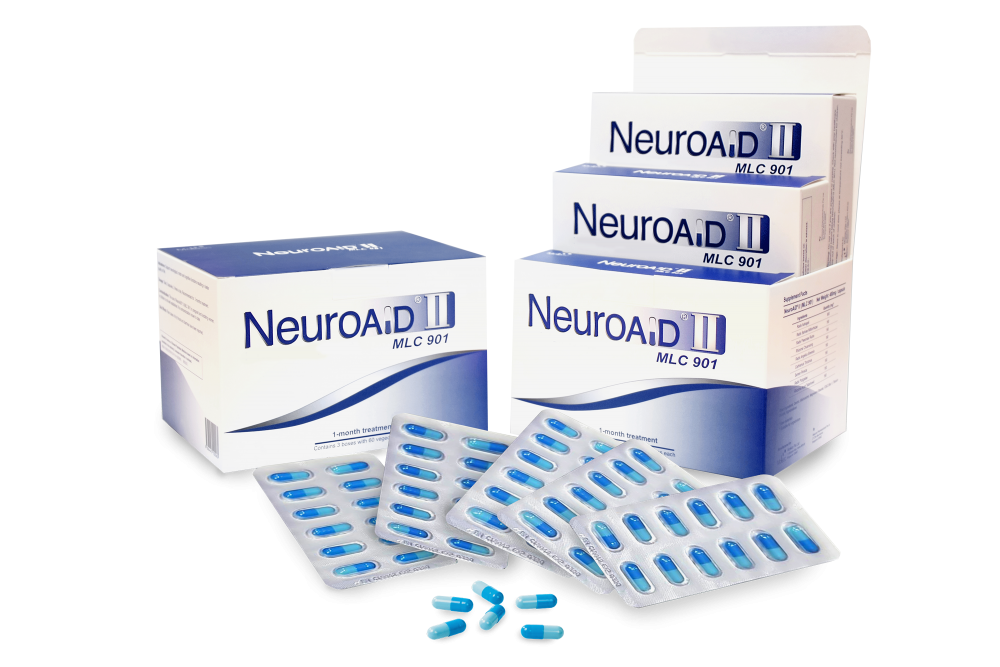 The recommended dosage is 2 capsules at a time, 3 times daily, for a minimum of 3 months.

Oral route with a glass of water. For people with swallowing difficulties, it is possible to open the capsules and to dilute the content in water. It is also possible to administer the diluted content via a gastric tube.

To date, no drug interactions with NeuroAiD have been reported. For more information on NeuroAiD’s safety profile, click HERE.

Published clinical trials have confirmed that NeuroAiD has no blood thinning effect or effect on liver or renal functions. Similarly, NeuroAiD has neither any effect on blood pressure, and doesn’t induce any change in cardiac, hematological, hemostatic and biochemical parameters.1,2

Clinical trials on NeuroAiD reported only rare cases of nausea, minor headaches, increased thirst, dry mouth and vomiting for patients taking NeuroAiD. In these cases, it is advised to halve the dose of NeuroAiD for a few days and progressively increase it.

The use of NeuroAiD in pregnant women, lactating women and children is not documented, and cannot be recommended. To date, no other contraindications are known.

A 3-month course with NeuroAiD: 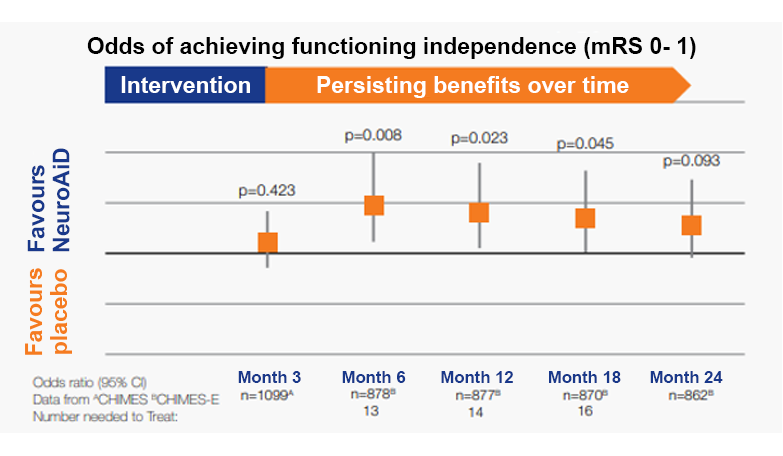 +50% in odds of achieving functional independence at 6 months.

In subjects with 2 to 4 prognostic factors of poorer outcome** and receiving NeuroAiD2 :

*CHIMES-E published in Cerebrovascular Diseases journal is the pre-planned extended follow-up to 24 months of the CHIMES study5, a 3-month study conducted on 1099 subjects. The CHIMES study was published in Stroke journal in 2013. **Prognostic factors are defined as older age, female sex, baseline NIHSS score ≥ 10 and time to first dose 48h. 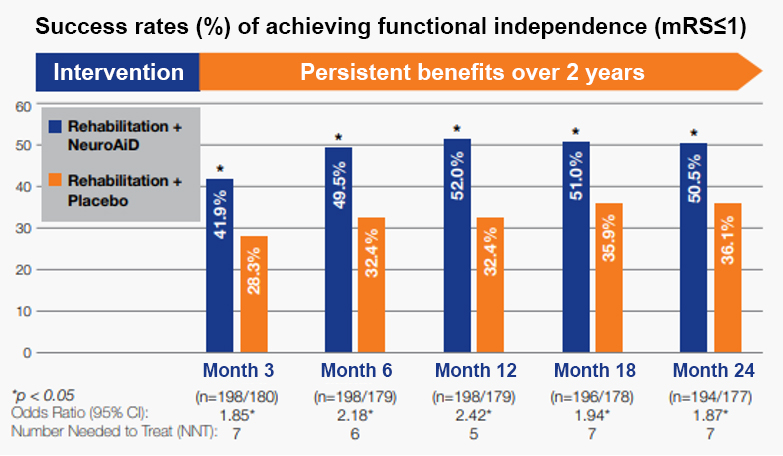 +50% in odds of achieving functional independence at 6 months. 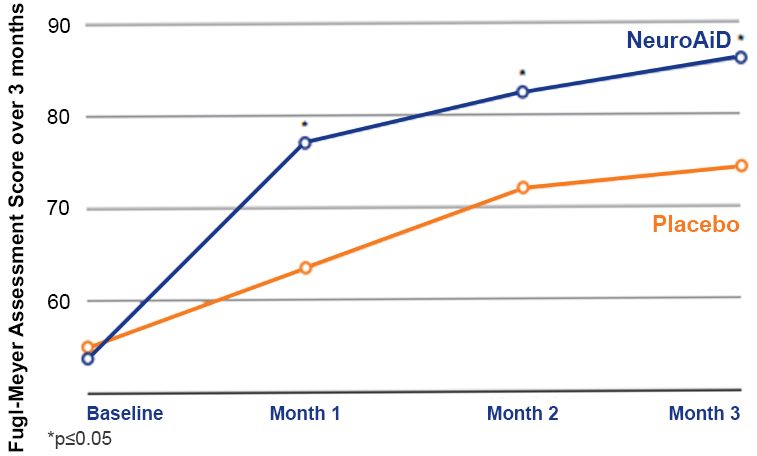 Significantly better motor recovery observed since month 1 and sustained up to month 3. 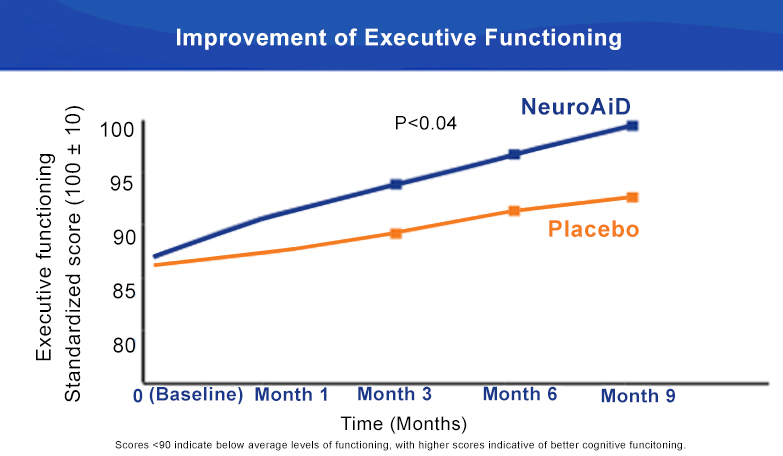 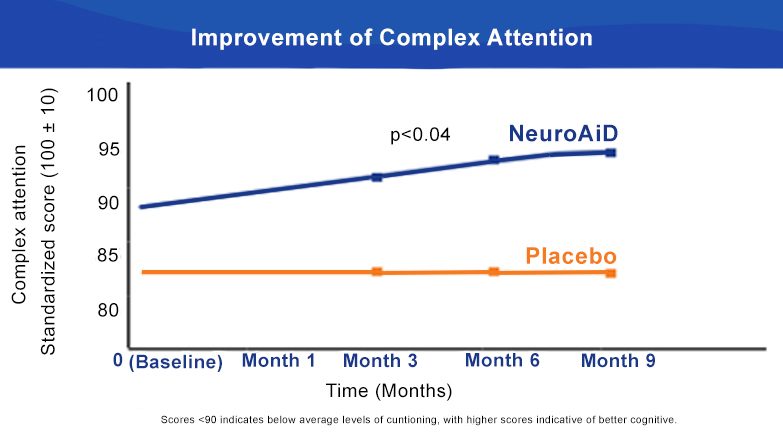 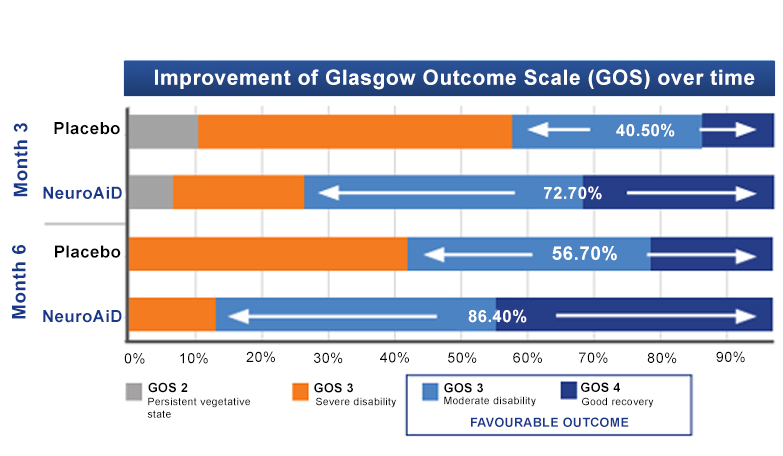 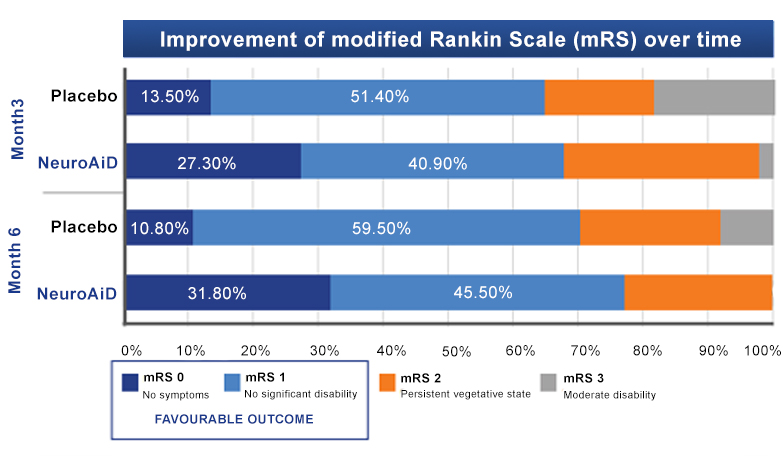 NeuroAiD has a favourable safety profile and is well-tolerated

NeuroAiD is safe as an add-on treatment for neurological recovery.

To date, no drug interactions with NeuroAiD have been reported. NeuroAiD should be taken in addition to preventive treatments of cardiovascular risk factors commonly prescribed after a stroke; these typically include antiplatelet, antihypertensive, and cholesterol-lowering drugs, among others such as anti-diabetics. Systematic clinical trials have shown that NeuroAiD does not have any interaction with aspirin. Patients taking NeuroAiD with anticoagulants have reported no impact on their INR (International Normalized Ratio). Nevertheless, it is recommended to keep monitoring INR when NeuroAiD is initiated as it is routinely done for patients taking anticoagulants.

NeuroAiD is manufactured in Singapore under the international standards of Good Manufacturing Practice (GMP). The GMP standards are applied to procedures in manufacturing dietary supplements, including approval of raw materials, production and process controls, laboratory testing, and product packaging, labelling, and distribution. These processes are regularly audited by independent health authorities. Every batch of NeuroAiD is analysed thoroughly by third-party independent laboratories to confirm compliance with international standards, ensuring utmost ensuring utmost security of NeuroAiD use.

In vivo effect of NeuroAiD pre-treatment on BDNF protein levels in cortex sections. (A) Representative epifluorescence microscopy photographs of BDNF immunoexpression in cortical neurons in brain sections. (B) Quantification of BDNF signal intensity in immunostained neurons.

Epifluorescence microscopy confirmed the development of an important axonal and dendritic network on cell cultures with NeuroAiD.

NeuroAiD promotes both the development of new synaptic connections and the modification of existing ones, including an increase in the number and length of dendrites and synapses. A 60% increase in the length of the neurite was shown at Day 14 for NeuroAiD group. 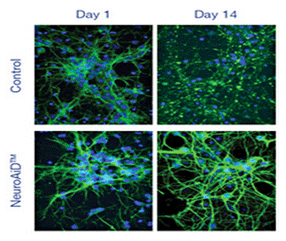 The combination of its selected 9 herbal ingredients has a priming effect on neurorepair to achieve global functional recovery.

Visit the Publications tab for more information on NeuroAiD's properties and mode of action.

NeuroAiD plays a role in the hallmarks of

NeuroAiD has a multimodal mode of action on the hallmarks of Alzheimer’s Disease mechanisms.

An in-vitro study conducted on cultures of human neuroblastoma cells showed the effect of NeuroAiD on the APP processing 1.

NeuroAiD has an anti-tau phosphorylation effect2

The hyperphosphorylation of the tau proteins is another neuropathological hallmark of AD. An in-vivo study showed that NeuroAiD is impacting this process 2.

A randomised, double-blind, placebo-controlled trial conducted on 125 mild-to-moderate probable AD subjects, receiving NeuroAiD (MLC901, 2 capsules, 3 times a day) or placebo as an add-on therapy to standard AD treatment for 6 months, followed by an open-labelled extension study where all subjects received NeuroAiD in addition to standard of care. 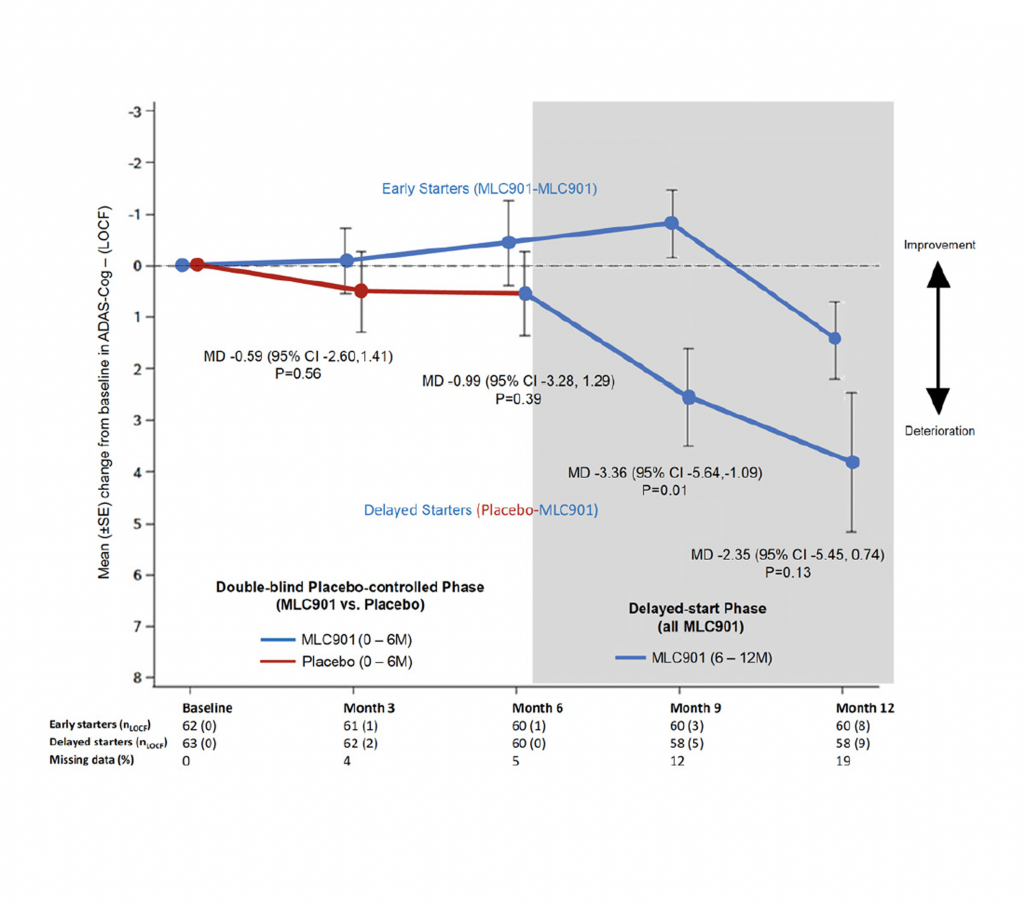 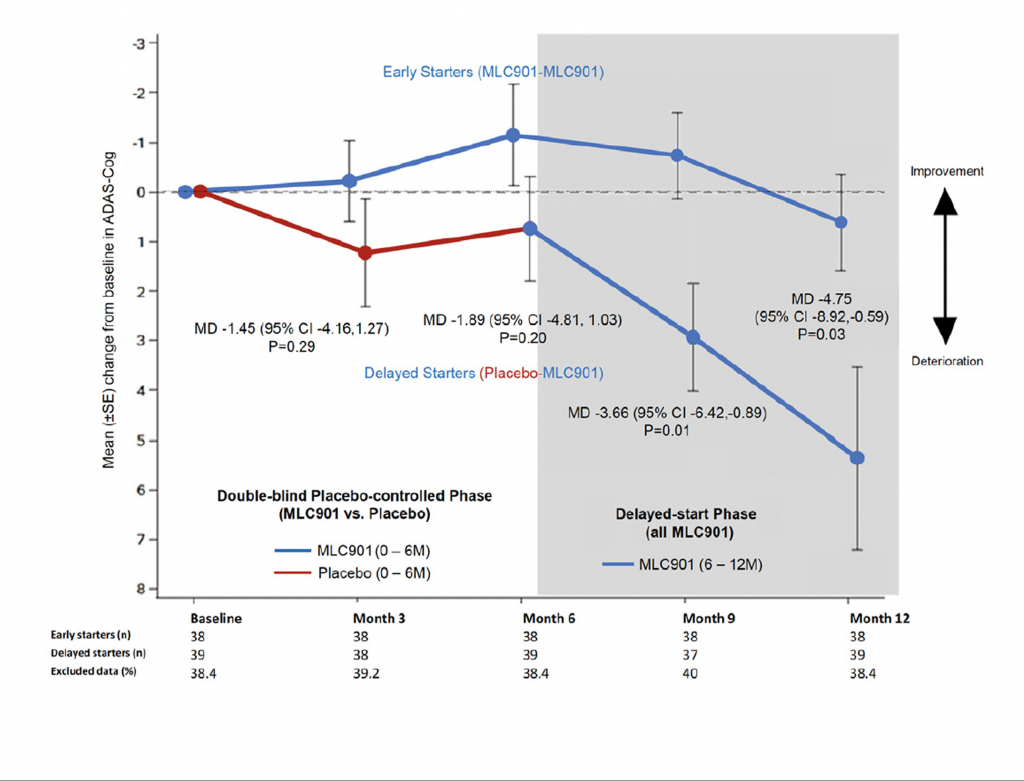 NeuroAiD is value-added over the long term with a favourable safety profile4,5,6

Open-label pilot study including 124 Alzheimer’s disease patients who failed to benefit from a previous 6-month course of Rivastigmine (lack of efficacy and/or poor tolerability), receiving NeuroAiD for 4 years. Cognitive state of the subjects was assessed by MMSE and ADAS-Cog every 6 months.4*,5*

* Studies conducted with NeuroAiD MLC601 at 1 capsule, 3 times a day.

NeuroAiDTM is a trademark of Moleac. MLC601 (NeuroAiDTM) and MLC901 (NeuroAiDTMII/ NurAiDTMII) are two different proprietary formulae which have been shown to be equivalent in pharmacology and are referred as “NeuroAiD” in this document.

NeuroAiD is available in over 32 countries.

Moleac has developed multiple partnerships with companies sharing the same values and vision to deliver innovative solutions in each market and address medical unmet needs, particularly in post-stroke and post-traumatic brain injury recovery.

Our growing network of partners ensures the availability of NeuroAiD to an even greater number of stroke victims and victims of traumatic brain injuries worldwide but also patients experiencing cognitive decline.

Since 2006, NeuroAiD has expended its presence to over 32 countries and we still aim to make NeuroAiD available to more patients in need worldwide.

Disclaimers:  This webpage provides scientific data and information exclusively meant for healthcare professionals. NeuroAiD™ II is a trademark of Moleac. MLC601 and MLC901 are 2 different proprietary formulations which have been shown to be equivalent in pharmacology and are referred as NeuroAiD on this webpage.

Find-out if NeuroAiD is right for you.

Leave your questions to our Customer Care team by clicking on the box below. Always seek advice from your physician.

This section is Designed for Medical Professionals Only.

Please Confirm That You Are A Healthcare Professional